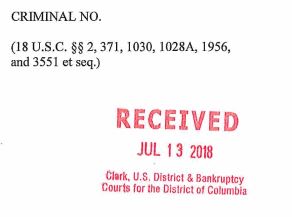 Now that the indictments for the Russian operatives who meddled in our election have been made public, only the most devoted Trump catamites will deny that if nothing else, Russia has engaged in active measures to subvert our democratic institutions.  It is possible to admit this, without implying collusion or, more appropriately co-conspiracy by Trump and/or his campaign; although it is becoming increasingly difficult to do so.

Many Trump supporters seem content with the idea of Russian meddling, as long as it benefits their side.  Some were willing to go as far as thanking Putin for his assistance. Some had no problems with Russian meddling, even after they found out they were used as rubes in Russian led disinformation campaigns.  Many others simply thinks its no big deal that Russians interfered.

Perhaps this attitude of their base is why there are still republicans who choose to place their faith in Putin’s denial, rather than in the shared conclusions of the DOJ, the intelligence community, and the U.S. Senate.  Instead of looking for solutions to prevent a second attack on our elections this November, they are instead engaged in an attempt to impeach Rod Rosenstein and level partisan attacks against the FBI, in an obvious quest to sideline and discredit the Special Counsel’s investigation.  This bumbling, misguided attempt of blind sycophancy could prove their undoing.

In order to understand the flaw in those Republican’s logic, it is important to understand first that President Trump was not Putin’s end game.  That was simply one move of one chess piece.  Putin wants to win the game, which means the United States loses.  Getting Trump elected was simply Queen’s Pawn to D4.  There have been several other moves since, but his next real gambit comes during the midterm elections, this November.

Putin’s overall strategy involves destroying our confidence in our very democratic foundations, and he has already partially accomplished that goal by damaging our confidence in the election infrastructure.  The next step could be to show how our own apathy has allowed crooked, corrupted and in some cases perverted individuals to attain the highest offices.  While the 2016 attack was meant to favor certain candidates, the 2018 attack will be to expose certain people who are currently in office.

The only incumbents currently defending Russia and Trump, and obstructing the investigatory mechanism to prevent another attack, are republicans:  Trey Gowdy, Bob Goodlatte, Mark Meadows, Louis Gohmert, just to name a few.  Little do they know that they are the most obvious targets of the next attack, or maybe some of them do know.  That would explain the unprecedented number of Republican incumbents not seeking reelection.

It is already known that several high-profile republicans were also hacked in 2016, yet no damaging information was released by the hackers, why do you suppose that is?  Most likely, any damaging information was retained by the Russians for use as kompromat.  However, now that the Russian’s hack operations have been compromised by U.S. counterintelligence, there is not enough time to set up a new outfit with a similar level of sophistication.  So how can they exact the maximum amount of damage with the resources they have?  Release the damaging information on the republicans, and engaging in similar disinformation campaigns as before, just now on the other side.

Doing this, thereby exposing the “other side” and leaving the same party loyalists looking feckless and incompetent, showing Americans how easily they have been duped. By exposing those politicians whom they had spent the last two years engaging in shamelessly endorsing and blindly following; it is the ultimate in psychological warfare.

So know this republicans, Russians did not attack democrats, they attacked Americans, they attacked the very system which put you in power.  Putin’s goal is not a convenient gift to you; it is your county’s eventual destruction.  You need to wake up and come to the table, because you are most likely the next target.