The Twitter handle @PressSec belongs to the executive branch of the United States Government; it is in fact, government property in every sense of the word.  It is not Sarah Huckabee Sanders’s personal account.  That honor goes to @SarahHuckabee which boasts a respectable 226,000 followers; of course that pales in comparison to the 3,050,000 followers who presume the White House Press Secretary account will be used for official business of the United States.

Think of an official Twitter account as stationary.  You are free to write your messages on it and sign your name; but if the stationary holds the letterhead of an official government position then it can reasonably inferred that the message is endorsed by that office.  When the Press Secretary sends a tweet on @PressSec, it holds the power of that office, just as if she sends a letter on official Press Secretary Stationary.

On January 14, 2018  the following Tweet was sent regarding Alexa, an Amazon product 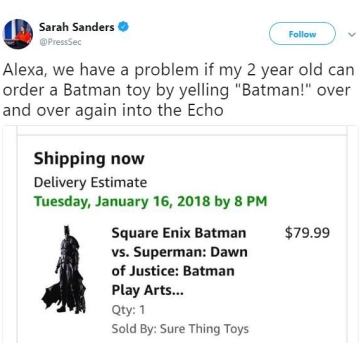 This is clearly a personal issue, not remotely related to the business of the government, although it came around the same time that President Trump was railing against the same company, as well as its founder, chairman, and CEO Jeff Bezos.

The account of the scenario, as described in tweet, was most likely a lie, but to give her an undeserved benefit of the doubt, perhaps she just described the event poorly given the character restraints on Twitter.

Fast forward a little more than six months and this tweet was sent after Ms. Sanders was refused service in a restaurant based on the owner’s moral objection to the Trump administration, and upon the consensus with her staff, asked her to leave.  Ms. Sanders left without objection, according to reporting.

The restaurant’s owner was fully within her rights to deny service.  As a public accommodation, a restaurant cannot refuse to serve a customer for reasons of race, color, national origin/ancestry, sex/gender, religion/creed and disability.  In some states, sexual orientation and gender identity are also protected.  However, as explained here, a restaurant can legally deny services for other reasons.

“Normally, (refusal of service) would only be warranted where the customer’s presence would somehow be distracting to the wellbeing, to the safety, to the welfare of the other people in the business and the business itself. They can’t arbitrarily refuse service to some because they don’t like the way that they look,”

So, besides the fact that some of the staff of the Red Hen are part of the LGBTQ community, and they were uncomfortable given position of the White House, as well as the Huckabee family regarding their past words and deeds.  Also, Lexington Virginia voted overwhelmingly against Trump.  So arguably, catering to the highest profile mouthpiece of the administration could be seen as a bad business move.

Here is the problem with using the @PressSec handle to send these tweets.  These are very personal matters.  It can be argued the Red Hen incident occurred as a consequence of her position, but the result does not affect the government nor the country.

Most people are familiar with the ethical prohibition of using a public position for private gain, the federal code against it is 5 CFR 2635.702, of course many would say that Sanders did not “gain” anything, ergo there is no violation, right?  Not so fast there compliance cowboy,  you forgot about subsection (b), which explicitly states:

Except as otherwise provided in this part, an employee shall not use or permit the use of his Government position or title or any authority associated with his public office in a manner that could reasonably be construed to imply that his agency or the Government sanctions or endorses his personal activities or those of another.

Both of the aforementioned tweets are in clear violation of this code. The Department of Justice specifically speaks to this in its explanation of rules against Misuse of Position which states:

An employee’s position or title should not be used to coerce; to endorse any product, service or enterprise; or to give the appearance of governmental sanction.

But, it’s just a tweet, right?  I mean surely the government did not intend for this rule to be extended to a government employee simply sending a tweet or two!

The Department of Justice has in fact, covered this as well on that same page when explaining the laws against misuse of government property:  28 C.F.R. § 45.4.

This is the Department’s de minimis use policy, and would permit an employee to send a short, personal electronic message to another individual. However, personal messages sent to large groups of people and messages sent to disseminate information on non-Governmental activities, such as charitable events and causes, commercial activities such as personal businesses, and religious observances, are prohibited.

Again, there is no ambiguity here, uncharacteristically clear for the Code of Federal Regulations.  Of course, we can fall into the fallacy of relative privation, and think that since there are other high-level officials engaged in much more egregious legal and ethical violations, this isn’t something we should worry about.  Consider then, that not only does that fail the test of basic logic and fairness, but it could be the very strategy that the most corrupt administration ever is counting on.